For centuries Rab has been resisting time and is vigilantly guarded by four bell towers which make Rab look like sailboat with four masts. The centuries-old symbol of recognition of the Rab Island is the mentioned quartet of four unique bell towers. The main parts of the old town are three parallel streets: Donja (“Lower”), Srednja (“Middle”) and Gornja (“Upper”) which are connected with twelve narrow transversal streets. The town seafront with two beautiful squares and terraces for rest and refreshment are the main town points of travel meetings, connections to the world.

Rab has a rich history from which many figures stand out. The island was inhabited by the Illyrians 350 years BC and in the 1st century Rab had become Roman municipium which developed into an important centre on the east coast of the Adriatic Sea under the name Felix Arba. “Arb” is an Illyrian word which means “forested”, “green”, and “felix” is a Latin word which means “happy”. Its rise started in the second half of the 11th century and it lasted until 13th century when it was under authority of Croatian rulers and Venetian Republic in a form of free Adriatic commune. In the 15th century it was sold to the Venetians and remained under their authority until 1798 and the arrival of Napoleon.
One of the most interesting stories is the one about Saint Martin, a stonecutter from Rab, who travelled to Apennine Peninsula and founded the Republic of San Marino in the 4th century. St. Martin is patron saint of Lopar and exceptionally important person for the local residents.

Saint Christopher should also be mentioned as an important person of the island of Rab. He is the patron saint of Rab and is credited for saving the island from the attackers. His skull is kept in the reliquary in the cathedral. 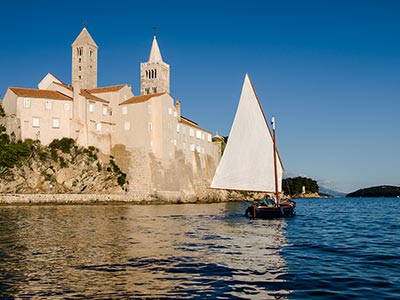